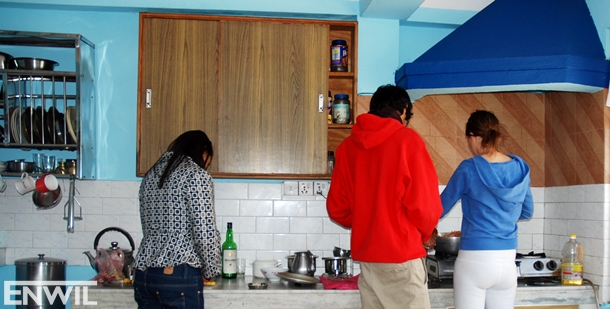 Getting Involved in the Process of Making Food with Sisters

I’ve successfully switched my keyboard layout from QWERTY to Dvorak. I wanted to change my keyboard layout because of the advantage it had over QWERTY. QWERTY was simply not designed for touch typing. So, changing my layout from QWERTY to Dvorak was a challenge for me because it would be tough. I would have to forget QWERTY, relearn Dvorak from scratch and rewire my brain again. It sure wasn’t possible for me to switch easily or quickly. Making a switch to Dvorak meant that I wouldn’t be able write until I could type in Dvorak. I thought I could write through QWERTY whenever I needed but most people who switched to Dvorak advised me not to switch back and forth between QWERTY and Dvorak because I’ll get confused between two layout. So I was supposed to stick to Dvorak even if I couldn’t write. I had to struggle.

We try to figure out and use shortcuts. If you find yourself trying to search for shortcuts then tell yourself that you’re not going to succeed at your goal. It’s simply not possible because you’re trying to skip the real work which is innate in achieving your goal. The real challenge lies on process and if you can conquer it then you’ll achieve your goal. It’s that simple.

When I first thought of switching to Dvorak I too was visualizing the end result. Visualizing how cool, effective and powerful it would be to be able to use Dvorak. I almost forgot about the process involved in it. I was trying to hack it or use shortcuts like practicing it once a day or 5 times a week. But later while I was researching about switching to Dvorak, I found out that it was a really bad idea to practice once a day or random days in a week. I was thinking about switching back and forth between Dvorak and QWERTY until I mastered Dvorak, but that was the least effective way to learn Dvorak.

So, I figured out that I should immerse myself and practice and type only in Dvorak because that’s what my goal is. If I tried switching back and forth between QWERTY and Dvorak then I wouldn’t be writing in Dvorak right now. You should always focus on one goal. If you focus on more than one goal at a time then there’s high chance that you won’t make it. Nowadays, I can guess if a person will succeed or fail in achieving his/her goal by simply figuring out if he/she is focusing on the goal solely or not. Immersing yourself in the goal is really important. There’s a good Zen proverb for this, “When walking, walk. When eating, eat.” That’s it!

So I started typing in Dvorak and didn’t even switch to QWERTY for typing. It took me around 5 minutes to write a two line comment in Facebook. It was really frustrating, and it was that frustration which made me a Dvorak typer. Had I tried to eliminate the frustration by skipping the hard part, I wouldn’t learn to touch type in Dvorak. We almost always try to neglect or skip that part, and we never realize that it’s the most important part in learning. You should always try and bring the need for it. If you think, you have lots of time for learning something then there’s high chance you won’t achieve your goal. You should bring out the need and start working on it from day 1. If possible use deadlines. It’s same for learning new language. You need to bring out the need for it and immerse yourself in that language. You need to speak from day 1 as Benny Lewis, author of Language Hacking Guide suggests.

I want to wrap this all up with an excerpt from Tynan, ”Kids in school are rewarded for grades more than effort, so they often cheat or blow through homework and get the answers right without really understanding the underlying principles. If you focus on losing weight and not eating healthy foods, you will reward yourself for doing unhealthy things that lead to weight loss. If you only reward yourself on process, you’ll eventually get there, and you’ll do it in a healthy and sustainable way.”