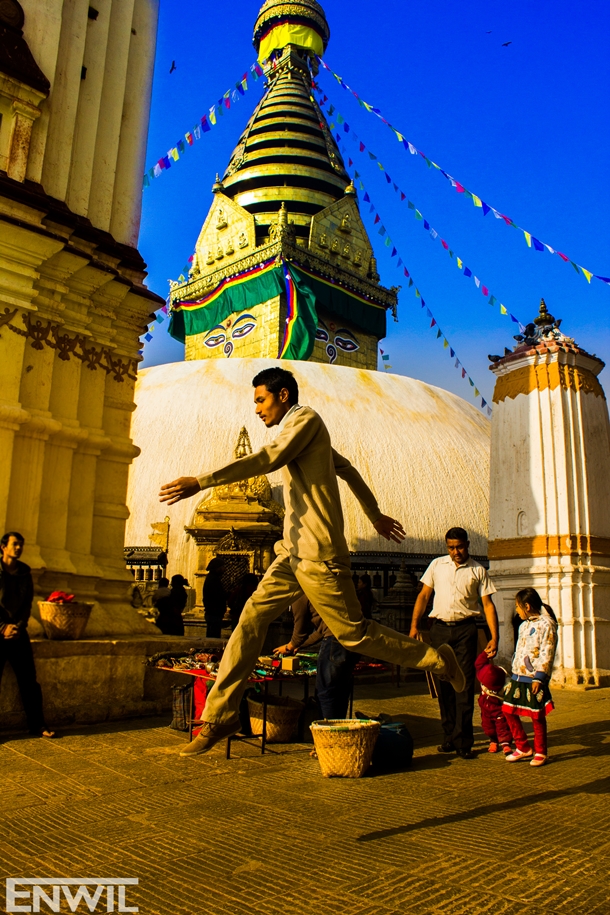 My Photo at the Monkey Temple in Difficult Mode. Flying = Difficult, here.

I’ve been learning many new elements in programming for the past month. I’ve tried approaching it through different perspective.

For me, personally, learning new elements in programming is similar to learning new stuffs or creating new habits.

It’s been a tough fight against resistance and consistency. I’ve always struggled to master both. However, while trying to learn new stuffs in programming, I’ve learned something of value.

Whenever you practice something in ‘difficult-mode’, you’ll start to feel easy in ‘normal-mode’.

At the beginning ‘normal-mode’ feels really difficult, and if we only practice in normal mode every time, it stays difficult forever.

So, we should always step up for ‘difficult-mode’, if we want to master in ‘normal-mode’.

The best example I can give of is computer games. You can either play in ‘easy-mode’ and easily complete the whole game or you can take it to the next level and play it real. This way, it’s thrilling and we can take more enjoyment out of it.

That’s the same with anything you’d consider learning.

At first, the easy-mode itself feels difficult, but later after we switch to difficult mode, lower level starts to feel easier.

When we speak of practicing, most people tend to practice in normal or easy mode until they get better at it.

We’ve all heard this famous quote,”Practice makes a man perfect.” So, we all tend to practice until we get perfect, but only on the same difficulty.

Even though this quote works as it says, I don’t like the idea of limiting ourselves to it. Instead, take one step further than practicing and take it to difficult mode.

Practice in difficult mode, instead of just practicing to get perfect in normal mode.

When you feel normal mode to be easy, you’ll have upper hand against normal people. So, if you can substitute normal with difficult then difficult starts to feel like normal. Which means you’ll be improving significantly every time you practice.

Most people like comfort. So they try and make it easy for themselves. Thus, they practice in easy mode.

If they think it’s really easy and want to take it to next level, they’ll choose the normal mode. They never even think of touching the difficult mode. Which will, of course, limit their improving capacity.

That’s the reason choosing to work on difficult mode will help you achieve your goals faster.

However, some people argue that when we work or practice on difficult mode, we might get frustrated and never go back to it. For example: While programming, if I try and tackle very hard problems and fail doing it, then I’ll feel really frustrated and de-motivated to work on it. Sometimes, even to the extent of leaving those problems forever.

What I usually do during these type of situation is that I bring the level one step down. If it’s too difficult and overwhelming, I tackle easier problems first and then slowly get to the difficult ones.

It’s about identifying the situation. When we have a chunk of work to complete, we should consider completing easier problems first.

We should also understand that, work and practice are not the same thing.

Usually, practicing on difficult mode will get you to your goals faster. However, there are situations where you should consider working on the easier problems first, like while working on programs.

To end this, whenever you are about to practice on new stuffs try working on difficult mode. It will not only help you achieve your goals faster, but also sharpen your skills and make it easier to tackle normal stuffs in real life.