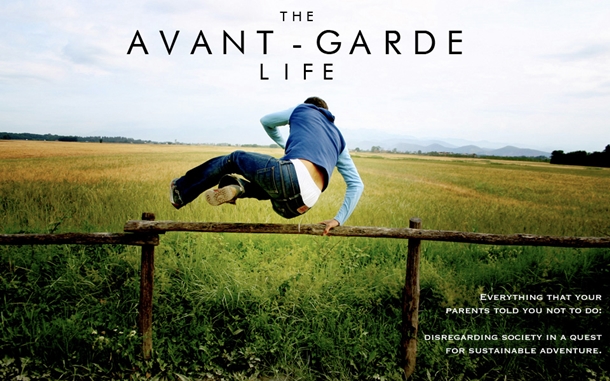 Just about a week ago, I finished reading The Avant-Garde Life by Jamie Bowlby-Whiting, the creator of GreatBigScaryWorld.com. I enjoyed every piece of the book and was duly inspired by it. It was written to help other people follow their own dreams by disregarding the conventional rules of society in the same way that he has chosen to do, and features great advice from other people who have chosen alternative paths in life. He also mixes up some philosophy about happiness and life.

So, here are some excerpts that I highlighted  while reading The Avant-Garde Life, which you can get for free at GreatBigScaryWorld.com/ag. And there’s a short interview with the author below the excepts.

The best kind of charity is to help those who are willing to help themselves.
==========

We measure everything against the average because we do not want to appear less successful than others around us. In other words, happiness is relative. In a competitive working environment, everyone pushes for more. More money, more success, more everything. If you live your everyday life in this environment, you can never stop. However high up the ladder you climb, you will always be able to ask for more. If you ever reach the very top, you will have to fight to keep others beneath you. There is no end goal.
==========

It is only when you are becoming, that events have an effect on our levels of happiness. Becoming is the period of transition, of change.
==========

You cannot simply rely upon one large positive event to bring you ongoing levels of happiness.
==========

You should keep having new and exciting experiences in order to maintain elevated levels of happiness.
==========

Better still, think back to your childhood when you had big dreams about the world. Look through that small child’s eyes and assess how great your life and your job really are.
==========

Do not live your life in a way that will offer you regrets. Time is precious and non-refundable. You can never take it back.
==========

Biological evolution dictates that we must strive for excellence above mediocrity.
==========

For most people, night is when the demons come. It’s the only time of the day when they are free of obligations to their jobs and left with nothing more than their own thoughts. To silence those thoughts, people learn to suppress them by overloading their sensory systems with digital entertainment and letting go of reality by consuming alcohol. Both your fears and frustrations at your extraordinarily ordinary life can be easily suppressed by an over indulgence of flashing lights or alcohol. There is a reason why most homes have televisions and why the average Westerner spends 20-30 hours watching television every week. Other than simply existing, we’ve forgotten what to do with ourselves now that we no longer have to fight to survive.
==========

Enjoy everything while it is still a pleasure, but stop it before it becomes an addiction. Addictions are pleasureless activities driven by compulsion and obsession. They suppress true desires, leaving you with a dirty feeling of dissatisfaction.
==========

As a child, I found myself obsessed with computer games. In the end, I felt a compulsion to play them and realised that I no longer took pleasure in completing levels. I played because I didn’t know what else to do. I had a comfortable life and even the grim, joyless dissatisfaction of winning on a TV screen couldn’t help alleviate the mediocrity of life.
==========

A wise American president, Theodore Roosevelt, once said, “Far better it is to dare mighty things, to win glorious triumphs even though checkered by failure, than to rank with those timid spirits who neither enjoy nor suffer much because they live in the grey twilight that knows neither victory nor defeat.”
==========

The unbounded joy that one can experience from simple pleasures is not known to those who have not experienced times of great difficulty. Often it takes a dramatic life event such as the loss of a loved one or an insight into one’s own mortality to experience great difficulty for the first time. When extremes of feeling have been suppressed for too long, dramatic events can throw one so far out of life, that it is hard to know how to come back.
==========

Solo travellers meet more people than those who travel with friends because they constantly have to make the effort to engage in social interaction. When others see you on your own, they will find you more approachable. From past experience, I have found that the more comfortable I become in my own company, the more approachable I am to others.
==========

It is with good reason that so many people now choose to move through the world solo. It is not because they have no friends. It is because it frees them of the limits imposed by a travel partner. Travelling solo offers a way to experience the world in an individual’s own unique way, with no limits and no boundaries, other than their own perceptions of the world.
==========

The world is not a list of places to check off. You do not know a place by simply visiting it for a matter of minutes and taking a picture. You could travel to every country in the world and not see anything if your only aim was to say that you went there. Equally, you could spend a whole lifetime trying to explore a single country and never see it all, never know everybody that calls it home.
==========

The movers and shakers in this world are the people who chose not to conform. Think of your real-life heroes, whether living or dead. Leave the superheroes for now. Why are they your heroes and what did they do? At the time they existed or in the field they were involved with, were they considered conventional? No. The great men and woman throughout history, whether scientists, creatives, or ‘undefinedists’ were not the people who conformed to society. They were the ones who had new ideas and chose to break free. No matter how much they were ridiculed, disbelieved, or verbally crucified, they had a belief that they followed through on.
==========

Not every new idea is a good one. But if we do not have new ideas, the world will stop evolving. Our species as a whole will become weaker. This is not how evolution is designed to work.
==========

It was only after years of travel that I realised one could eat for free when a friend of mine introduced me to the idea of skipping (otherwise known as dumpster diving or freeganism). This involves going to the waste bins at the back of supermarkets and collecting the food that has been disposed of due to it approaching it’s sell by date. This may sound terrible at first and when this idea was first suggested to me, I was rather disgusted at the prospect. Then I found out that most food in the bins has gone out of date that day and is sealed. Most people who take part in this activity do it not for economic reasons, but as a way of reducing world food waste. There are people around the world who do not have food to eat, yet we throw away huge surpluses of food everyday. Trash wiki is a great resource for finding local skipping spots across the world.
==========

Possibilities are infinite, the path is unmarked, and you unmake the rules.
==========

Along those lines, I also asked him some questions about him and his life. He’s really honest about everything – and that’s what I like about him. 🙂 Most questions I asked are out of curiosity. He has really interesting stories and adventurous life, you’ll surely like the interview below:

A) I started out on the well trodden path in life and worked my way from school to college to University and came out of it all with a Masters in Mathematics. Instead of building a career and making lots of money, that’s the time when I stopped walking that path and decided to live life in a way that I wanted to live it. Someone once said, “I believe in you,” and I took those words to heart. I want to believe that nothing is impossible.

Q) If you were given a chance to go back to your life when you first started moving, what would you do differently?

A) I would have started creating earlier. Although I have created memories everywhere I have been, I want to make things that other people can appreciate. These range from words and videos on the internet right through to building schools and digging wells. Possibilities to create something wortwhile and share it with others are endless. That’s what I want from my future.

Q) Who is your role model and why?

A) It’s quite ridiculous but I always loved Robin Hood, Jack Sparrow, Max (from Where the Wild Things Are), and The Little Prince. They are a happy combination of daring adventurers with simple morals and aims who aren’t afraid to accept challenges and can adapt quickly to any situation. Plus pirates and moral theives look pretty damn cool while doing their thing. In the real world, I really enjoyed the story of Alastair Humphreys who cycled around the world without much money after he finshed university. I love real life adventurers who take on great challenges without the need for excessive amounts of money or training but instead, have a whole load of guts.

Q) What things do you not like to do?

A) Go on guided tours, read guide books, take photos of buildings that look better on postcards. Everrything typical toursits do. Many people love to do these things and that’s really great for them. Those things just aren’t for me. I like to walk the road less travelled.

Q) Tell us about a time when things didn’t go the way you wanted.

A) It happens every day! Nothing in life can go to plan and if it did, life would be terribly dull. A few years ago, I realised that putting all our eggs in one basket can lead to heartbreak. Instead, I found that we have to react to whatever situation we find ourseves in and adapt to alternative plans. Right now I am planning a large journey and due to visas, global conflicts, and unforseen events that happen everyday, I’m not yet sure which continent it will finish on.

Q) Finally, what’s your superpower or what’s your spirit animal? (How do you get the courage to travel the world?)

A) Superpower: Flight. I’d fly like a peregrine falcon so I could go anywhere and everywhere as slowly or quickly as I wanted. The journey is often more important that the destination.
Spirit Animal: Ideally a snow leopard. They are sleek, elegant, powerful, and all around, incredible creatures. Realistically it’s more likely to be a meerkat but that’s OK because I like them too.
Courage: Courage is not an absence of fear, but a decision that something else is more important than the fear itself. Howeverr scared I am of what I am doing, I know that the happiness I will experience will outweigh the fear. That’s why I travel and do what I do.

These are the six questions I asked him, and I hope you enjoyed reading it.