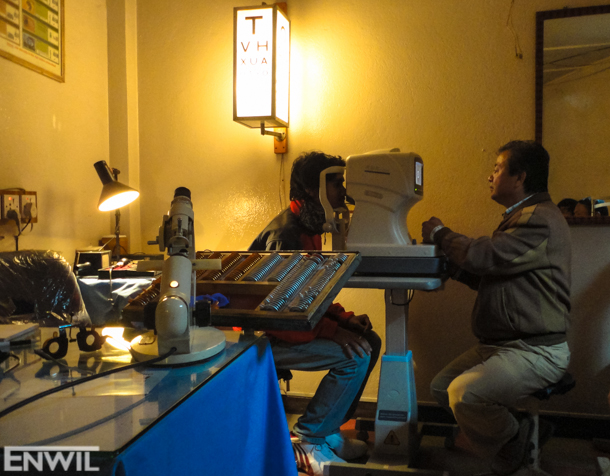 Eye Weakness is perfect example of Innate weakness. The picture is of me during eye checkup.

Everybody and everything has a weakness. It’s funny to hear that a cockroach made me realize it. Some weakness are innate in human beings and some aren’t. If it’s not innate then we can diagnose it using two effective measures. But we need to figure out our weakness in order to diagnose it.

Since, even the greatest men of all time had weaknesses, your chances of not having weakness is pretty low. Human beings have weakness and it’s simple as that.
We just need to figure it out.

Figuring out your Weakness.

If anyone(friend) tells you about your weakness don’t get offended. Instead thank him/her for pointing out your weakness because they usually prefer to stay quite on this matter. You would never figure out your weakness all by yourself – it’s really hard because of ego problem. People hate to be reminded of their weakness. And it’s not a coincidence that those people never taste success. Every successful people have filtered their weakness and dealt with it effectively, instead of fearing or running from it. Your friends could have easily taken advantage of your weakness, instead they told you about it. You are lucky if that happens. So start approaching your weakness with an open mind. Don’t get defensive because that’s going to do more harm than good. Ask about your weakness with your friends. If they can figure it out for you then you are lucky or else it’s a long detour for you. Weakness should not be hidden, it should be dealt effectively.

First is to ignore it and let someone else work that for you and another is to turn it into your strength. It won’t hurt if you prefer the first option but it won’t make you successful. Your weakness can drag you down easily. You should always be aware that everyone has a weakness – Achilles heels. You can change your weakness into strength but you’ve got to keep in mind that you will always have some innate weakness which you can’t change. For example: Cockroach can’t stand after they fall on their back. I tried getting rid of cockroach from my room because most of them live with me. The problem is that they are very fast and clever. You can’t get rid of them easily. So one day when I saw a cockroach I stumbled upon it and it fell down on it’s back. It was in perfect shape but couldn’t do anything even though it was alive. It’s because of their innate weakness – cockroach can’t stand up after they fall on their back. It was helpless. Couldn’t do anything, it struggled to stand up but in vain. That’s innate weakness.

That’s the same for us. We all have some innate weakness, which we can’t do anything about. That’s our Achilles heels. Since we are humans we are lucky that we can do something about it. What successful people do in this situation is that they delegate those works to others. They never get intimidated by it. They just deal with it effectively. Most people blame their weakness and that’s what makes them losers. There’s always some other way around to deal with it. The only difference between successful people and others is that successful people are open to their weakness and deal with it effectively. Whereas, normal people blame their weakness and most of the time run away from it. That does no good for you. Figuring out your weakness is painful most of the times. Most of us have ego problems while dealing with it, so we always neglect this part and pay for it later. 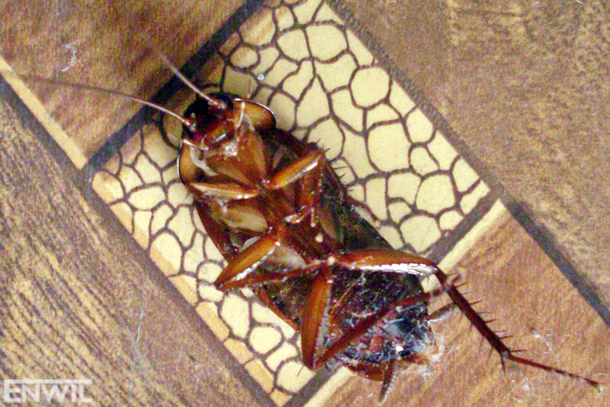 This was the cockroach which fell down on it’s back and couldn’t stand up. It made me think about innate weakness.

Every successful people in this world have approached their weakness and dealt with it in an effective manner. If possible, they turn them into strengths. That’s one of the highly effective habit successful people develop over time. Whatever we do, we always need to discover our weakness in the first place. After that, the root cause of it. Is it innate or not? If it’s innate then there’s nothing you can do and that’s your Achilles heels.

For example:
If you plan to run in 100 meter race to compete with world class athletes and you have one leg shorter than the other, you can’t win. Your one leg being shorter than other is your innate weakness. You can’t do anything about that. Unless science comes to the rescue.
However, if you have healthy legs and body but you couldn’t win the race because you lacked practice then lack of practice is your problem, or the root cause. That’s not your innate weakness. You can work on it and even change it to one of your strengths.
Or let’s say you have logical disorder and you have hard time figuring out mathematical problems. That’s also your innate weakness. So by all means you should delegate your logical works to someone else and try to avoid it all time. Instead work on something you are good at. That way you are increasing your productivity and efficiency.

You should never point out your competitors weakness, instead you should take advantage of it.
Here’s why: Your competitor is going to get offended if you talk about their weakness anyway. It’s because human beings have ego problems and people get offended really bad.

It’s a win win for you though. It’s because first of all you’ll get chance to take advantage from it and second you are not offending your competitor.

If a person doesn’t feel offended while talking about their weakness then talk about it because you are improving a person and that’s highly recommend. If the person is too conservative then you can easily take advantage of it.
You must be clever at certain times. If you have someone in your work who is better than you in every way except that he’s tardy. Then by all means, be punctual. You are hitting on his weakness i.e. his tardiness. If you can’t compete with anyone on their general level hit on their weakness. Keep being punctual with people who are not punctual. That’s the whole secret.

Everyone has weakness, talk about it and improve yourself. Take advantage of others weakness. Remember that even the greatest people of all times had weaknesses. Your opponent has it too.