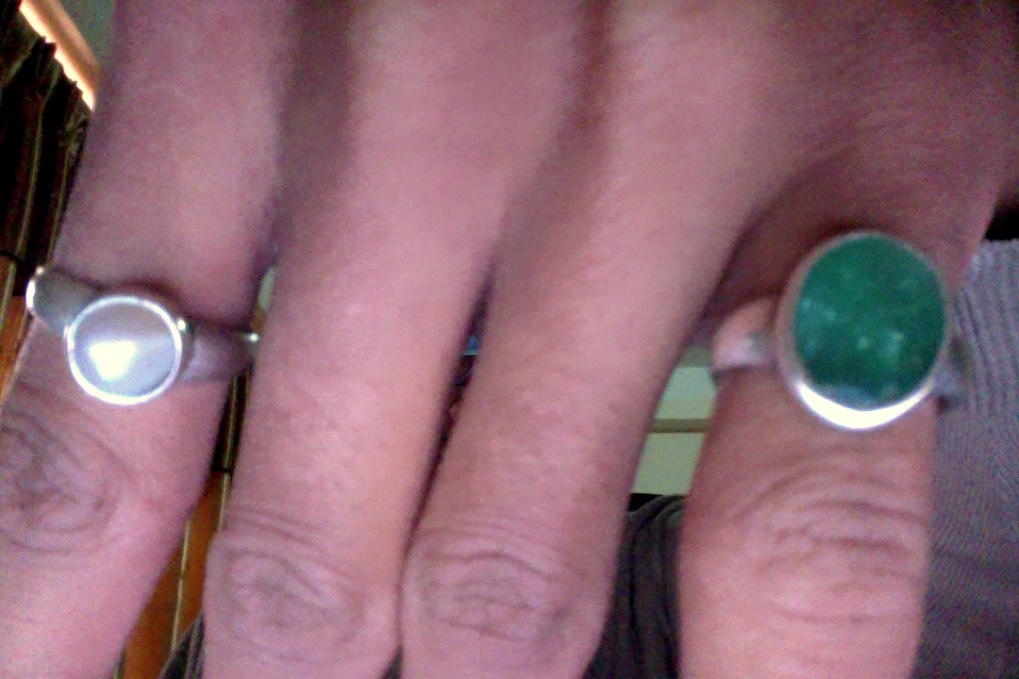 For no reason, I’ve been wearing two rings on my fingers for a long time.

I wanted to experience how it feels to wear rings in my fingers, as I’d seen many people wear it.

Having to hold something every time in your finger must be uncomfortable.

Initially before wearing the ring, I had this in mind and I thought it would be pretty uncomfortable.

Not only the ring, the necklace and the earrings as well.

Instead of just wondering, I thought of giving it a try. I went to the ring shop and asked if I could have a ring. There were all sorts of rings. Since I wanted to give it a try, I thought of choosing the most uncomfortable ring.

I wanted to wear something which was uncomfortable just to figure out how people manage to wear it and how they unconsciously take it as a part of their body.

I thought of wearing two rings with stones at once. There were lots of stones to choose from. I chose white and green. Those were the two colors I liked during that time. This website also has white and green color, if you notice.

So I ordered them. Within some days, my stone ring was ready.

I wore them and found it very uncomfortable as I thought. It used to disturb me in anything I’d try to do.

It all happened because of the ring. I was adapting it and changing the way I did things.

For some reasons I’m not aware of, my body actually did adopt the change. As of now, I feel normal wearing it. If I don’t wear it, it feels weird like something is missing.

I initially wore it just to experiment and was thinking of not wearing it with time. But I literally forgot to remove it because it felt like a part of my body.

What I’m trying to explain you through this is that our bodies can adopt change. Don’t worry about hardships in life. If it’ll ever come, your body will learn to adopt it. You’ll not even get time to realize how your body will adopt to those difficult situations.

I’m scared about my life most of the time. What if something bad occurs overtime? What if I become unhealthy and suffer all the time?

I remind myself that my body will adapt to the difficult environment itself. I know it because I have carried out lots of experiment like the one I mentioned above. Wearing these two stone rings allowed me to realize that my body can adapt change and that I don’t need to worry or stress about the future hardships.

I also experimented this with an ear top. I wore it for over a month or so and removed it after I felt normal wearing it. At the beginning, I found it pretty difficult to sleep with it. But with time, my body adopted it.

I realized that I was wearing the stone ring only after other people asked me why I was wearing it. I didn’t have any answer to those questions. It seems that most people here wear it for superstitious reason. But my purpose of wearing it was far from it.

Now that I have successfully experimented it and wore it for more than I initially thought of wearing, I’m removing it.

However, I’m thinking of wearing one plain ring without stone for my own amusement.

Ring reminds me that my body can adapt change. So, I want one to be with me at all times. Probably not always because I’ll remove it when I don’t want. But for now, I’ll probably wear one without a stone. 🙂