Last year during WordCamp Nepal 2013, I listened to almost all the speakers. Some of them were pretty basic stuff for beginners, which made me realize that I could speak on WordCamp as well.

I had a limiting belief that we should be an expert on WordPress to speak on WordCamp. By attending WordCamp 2013, I figured my belief was wrong.

Of course, you need to have some knowledge on your topic before you speak, but you don’t need to be an advanced level programmer to speak on WordCamp.

I realized that instead of being on the crowd, I could be on stage speaking. As I mentioned earlier, I didn’t have advanced knowledge on anything. But since I saw speakers talking about basic stuff, I thought that I should give it a try and speak on WordCamp 2014. I had this in my mind when I left Yala Maya Kendra after WordCamp 2013.

The basic idea is that difficulty level differs from person to person. Something that I feel difficult might be easy for you. And something that’s easy for me might be difficult for you.

I even have a friend who finds it pretty difficult to post a new blog post using WordPress. With time, of course, it’ll be easier for him. But just posting a blog post is difficult for him at the beginning. So, you can’t know before hand what’s easy and what’s hard for a person.

So anything that you’re finding it easy might be difficult to someone else. And they might be having problems on that specific topic. If you speak about it, those people will at least benefit from it.

First on August 12, I saw a post an WordPress Nepal group that called for WordCamp speakers. 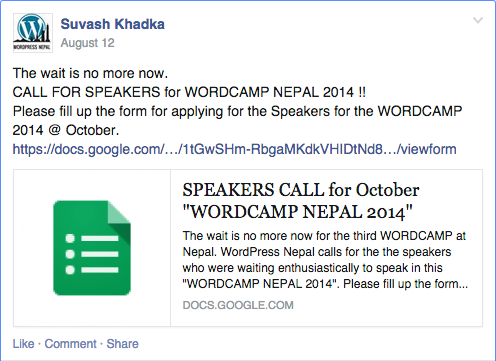 I didn’t care about it because I was sure I wouldn’t speak. I only wanted to, but I thought I wouldn’t.

I kept seeing new posts that called for speakers again and again during the course of the month, but I didn’t care to give it a second thought. 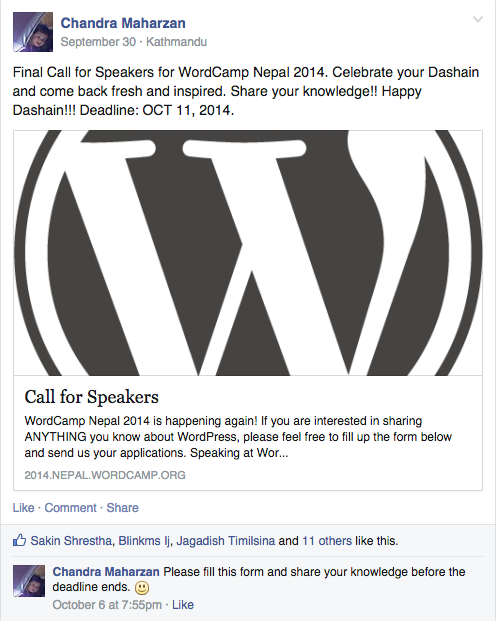 At the end, there was a deadline. Just before the day of the deadline, Chandra Maharzan posted that it was last chance for anyone to sign up as a speaker for WordCamp 2014. 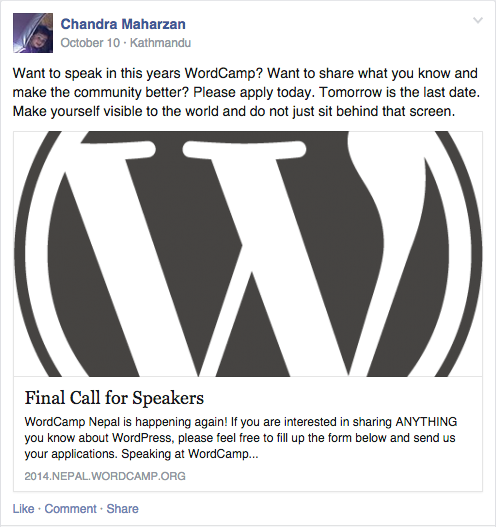 I didn’t have any presentation topic, nor did I have any idea for it. Anyway I just thought of signing up. More than half of my body was detesting this idea, because I simply didn’t have any topic to speak about. And I was feeling very uncomfortable about the idea of speaking.

While I was filling up the speaker form, it asked for the topic. I didn’t have any topic. I thought about it for sometime and figured out that I’m using git for version control, and that nobody had ever spoken about it before.

So on the topic area, I just wrote “How to track your files using GitHub.”

And after a week, we were called for initial speaking session. I made slides just before the day of initial session and showed up. I thought it would be easy to just do the presentation. But I was dead wrong. I felt nervous just standing in front of around 10 people.

And then my session went horrible. It was probably the worst session I ever had. I couldn’t speak. I was nervous. I got confused about the slides myself.

We had WordCamp San Francisco live streaming party a week after that. 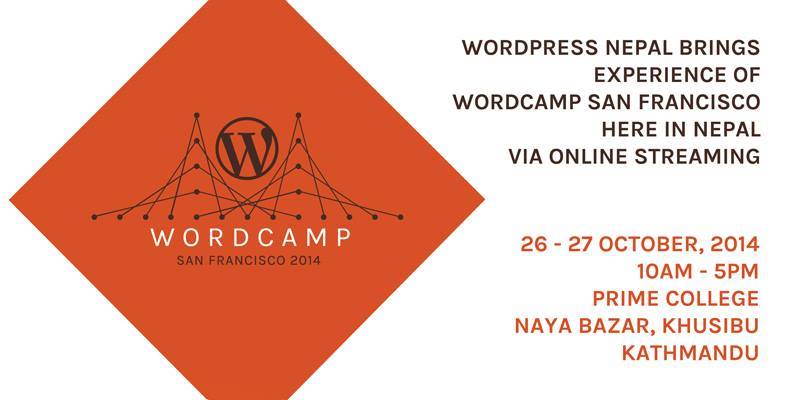 I watched and learned how speakers speak during the WordCamp. I kept this thing in mind and so during the second session it went reasonably well even though there were only 5 of us.

I again had some difficulty during the third session because I had changed many slides. I got some feedbacks on how I could improve those slides. Most of the feedbacks were based on keeping one point at one page, using visuals like pictures instead of words, and such.

At this point I learned that feedback is very important. Without feedback, my slides would have been mediocre at best, and my presentation would have sucked. My slides didn’t have any pictures and had lots of points crammed in one page. I improved that. And during every practice session, I learned something new about how to speak and speaking in general.

So, feedback is very important. Without it, my presentation wouldn’t have not been up to the mark.

I was pretty confident during the fourth session. It went well, even though everyone wasn’t paying attention. From that, I learned that we need to grab attention of the audience early during the initial session of the presentation.

That’s the reason I kept my personal story on how I lost a client in the beginning of the slide so that people can relate to it and then it would helps in grabbing their attention. 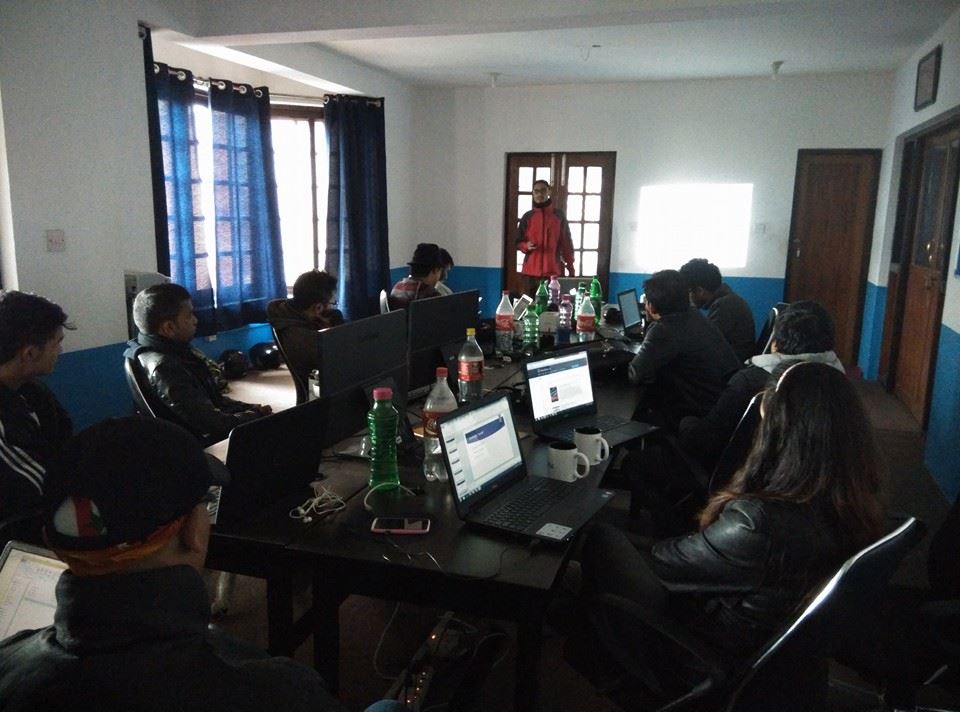 We had worked pretty hard for it. Not only the speakers, but volunteers, organizers and sponsors as well.

My session was at 2:05 PM after lunch and the WordPress for government panel discussion round. 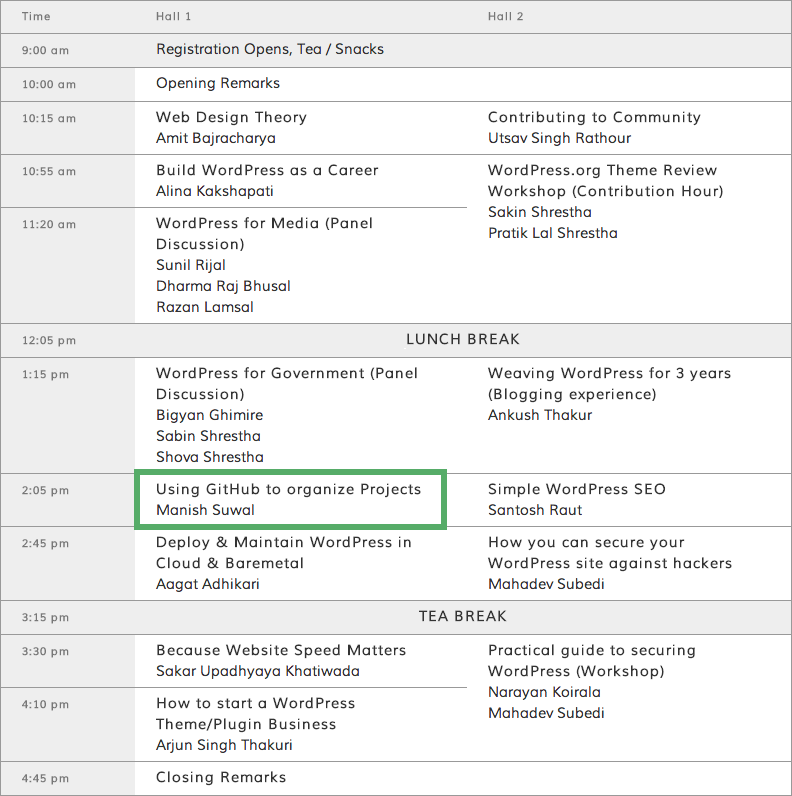 WordCamp Nepal 2014 as a speaker was incredibly awesome!

Speaking on WordCamp requires a lot of work. We had to go through lots of sessions–around 5–in order to speak about our presentation comfortably in WordCamp.

Maybe you won’t need that many sessions if you are used to speaking. However, it does require lots of dedication and persistence.

This was my WordCamp Nepal 2014 journey as a speaker.

Gun To The Head:

Just a day before the WordCamp, if I had privilege to choose whether to speak or not. I would have chose the option to not speak, because speaking in front of people is scary and uncomfortable. I would have simply stayed in my comfort zone.

But there was no way of going back. My name was on the schedule. I had to do it. I couldn’t run out of it.

There was simply no way out.

So in whatever you do, not just speaking in WordCamp, but for other important stuff in your life, create a situation through which you cannot escape. Just like how I did it during the WordCamp. I signed up as a speaker, went to all the speaking sessions, had my name on the schedule, and then there was no escaping from it. If I had a last chance to escape, I probably would.

Put yourself in a situation that just forces you. Where you just don’t have a choice. That whatever your emotions say, you have to do it. Like a gun pointed to the head. Either do or die.

If you think you have a choice NOT to do it, you’re just never gonna do it.