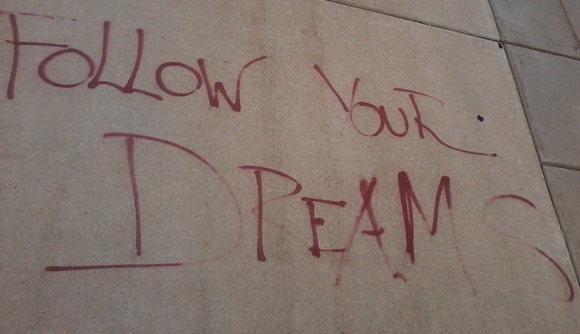 Whenever you are trying to do something new or something which average normal people don’t usually do or understand then everybody starts to doubt if you can do it or not. For the first time you’ll get negative expressions from  people. Most of the people won’t understand you. It takes real courage, trick and determination to face those challenge. Some of them are explained in points below.

Pissing off people can be seen as a sign of progress.  Well known people are criticized more compared to unknown people. If you’re not very well known, you aren’t likely to get criticized, aside from family and friends.  The fact that people are noticing you enough to criticize is proof that you are, in fact, progressing.  When people criticize, you need to piss them off no matter what or else you won’t be able to follow your dreams. Always consider pissing off people as a good sign.

You’ve got so much to do to achieve your goal. The only way for you to get discouraged about what you are doing is the critic. You need to piss them off so that you can follow your dreams.

Remember that you cannot satisfy everyone.

Having a strong belief in yourself and your abilities is easier when you realize that you will never be able to satisfy everybody.  Once you notice that there are some people who simply can’t be satisfied, you’ll begin to see these critics as the minority, and you’ll no longer take what they have to say to heart. Criticisms are minor things when you are aiming high.  When People are not satisfied with what you are doing you feel like you are doing it wrong. But it’s not. It’s just that you cannot satisfy everybody in this world with your ideology and preference.

Criticism is good for us. We hate when others are annoying us with their criticism, but it’s necessary. If you want to achieve your dream goal, you’ll obviously have to take over criticism.

For example read this short transcript of the Last Thursdays with Mr. Birendra Bdr. Basnet, Director of Buddha Air

” My family background is basically in agriculture and in that respect, I am a first generation entrepreneur (outside of agriculture). The reason behind opening Buddha Air was the creation of wealth. Fourteen years ago, when we were establishing Buddha Air, we didn’t have any equity and hence we started with debt finance. Looking back, the determination that we had fourteen years ago, was the key for the establishment of Buddha Air. Being a middle class family, opening up an airline company was a joke for everybody else. Even our own family made fun of us. They mocked, “We didn’t have five thousand rupees in our pocket but we were forwarding a project worth three hundred million rupees.” There were many factors which made it possible though, especially our strategic planning and action for the company. Some major values Buddha Air represents is diligence, integrity and honesty. We have been practicing these three values very seriously.”

Another example from along these lines from Sebastian Marshall, author of Ikigai…

Actually pissing off people is one of the traits which all successful people follow. It’s like you won’t get to million friends without having few enemies. You will have to eventually piss off and disappoint people in order to follow your dreams. And also remember that normal people are not criticized much because they do nothing. They are just like other people. If you are getting criticisms then you are one of five individual who is trying to do something.

People who can’t do anything will not let you do anything; Misery loves company:

There are lot of people who do nothing with their lives and they don’t want others to succeed because they aren’t succeeding. The time you realize that these types of people are going nowhere, it will be easier for you to focus on your goals and become successful.
There are some people who try to criticize your every move and step. Don’t let these people come in your way. Those people are the ones who’ll block you.
Always Remember!