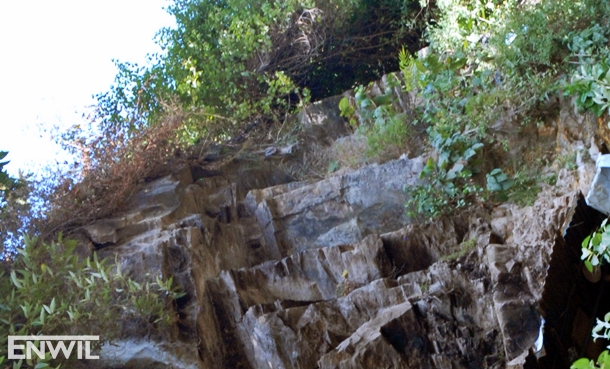 You can see the cave at top right. You can’t see in the picture until you climb these rock stairs.

We were off to Pashupati after exploring Boudha. We kept walking until we found the place for conducting cremation ceremonies. I went to explore those places with my brother Degju and his friend Carrie.We were walking around the place not knowing what to do next. We crossed the bridge and took steps to get to the top where we could overlook Pashupati.

While we were staying at the top overlooking the whole Pashupati and Cremation area; my eye caught a glimpse of a cave at northeast of Pashupati. Not being sure I thought of going there and asked my brother if he wants to go there too. He thought it would be cool if we could go. 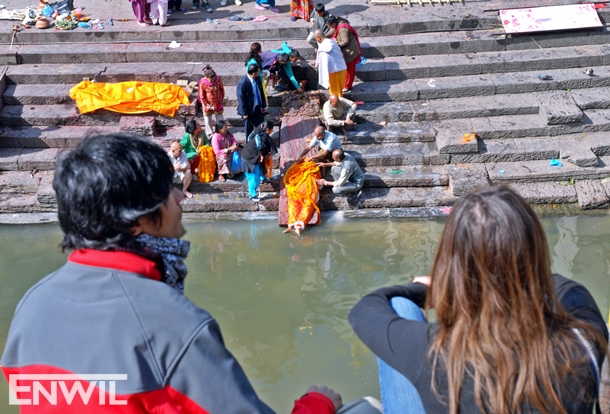 This was the exact time when I saw the Cave. We were talking about death while overlooking Pashupati.

We were tired at that point and that place was located at far east of Pashupati which meant that we needed to go back, cross the bridge, walk and push ourselves till there. Since we thought of going there without much planning I pushed my whole body to get there because I was tired and hungry at the same time.

He said,”Please visit the cave, a baba lives there. You should check it out.” 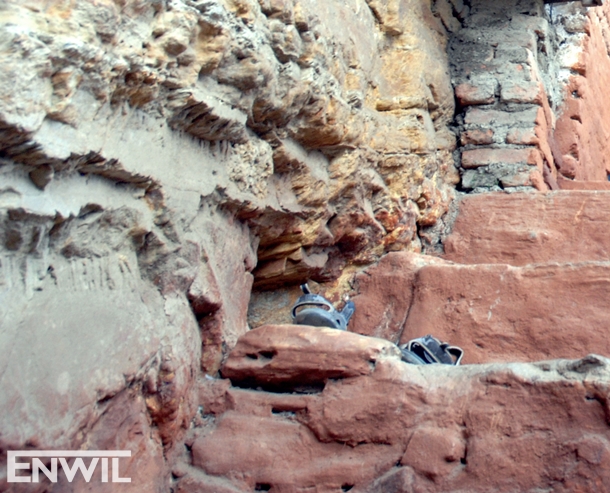 I was so happy that we were allowed to explore the cave which is what I’ve never done before. We walked up slowly and saw a thick smoke coming out of the cave. There was a very small hole to enter the cave. It was not possible for us to enter easily. We had to bend our back to go inside. I couldn’t see anything. It was really dark and smokey.
I was afraid that I would fall off because I couldn’t see anything in there.

We then heard a voice of the baba. He told us to sit down. We sat down and then I started to figure out slowly that the cave was not that big. I thought it to be really big but it was cool. He kept a black Tika in our head and then started talking.

He told us that he has lived there for fifteen years and has human skulls at his home.

I was constantly amazed at how peaceful the place was. It’s peaceful even if it’s located in the middle of the city and you can even hear the river flowing in the background.

We asked him,”What kind of baba are you?”

He replied,”Aghori baba, People call me Aghori baba. Do you know what it means?”

He then said, “It means that I don’t care about anything. Aghories usually don’t get hungry. I never eat salt and flour. Other than that, I eat everything and anything. I have ate Human Flesh, Urine and Stool to become aghori.”

We were shocked by his response, “WHAT!?”

He ate Human Flesh, Urine and Stool for becoming Aghori!

He seemed to practice cannibalism, urophagia and corprophagy. All of those which relate to human flesh, urine and feces.

For no reason I was scared at that point. Maybe because I hadn’t seen anyone like him before. Weird stuffs filled my mind and the cave started to look dangerous. My mind was blank. I didn’t speak anything because I couldn’t. I was surprised, excited and scared at the same time. Scared because I had previously heard dangerous stories about Aghori baba’s. He had his one black eye glowing at dark because there was virtually no source of light inside the cave. Only smoke!

After spending some time he asked us if there was anything we would like to ask him. He was very happy and he knew that we had some questions in mind.

So without thinking much I asked him,”People believe that you know the future. Is it true? Can you tell us too?”

He smiled and laughed at the same time and said,”It’s useless! Don’t ask for future, You Got To Make It! People ask me how long will they live, and if I say it then they start counting the days. So they die psychologically and never live happily. That’s why fortune telling is really dangerous. Don’t try and ask anybody. You are going to die one day so don’t think about that. Instead, Create your own future.”

He started talking in a friendly manner so we asked him some questions about his life.
He said he was a continental cook when he was really young and was third son among five brothers.

What baffled me was that he looked really healthy even though he didn’t eat normal food.
He even showed us his exercise routines inside the cave and his healthy sitting positions. He also said that thunderbolt sitting position is really good for health and Carrie’s thunderbolt position was perfect as she was sitting in that posture the whole time.

After spending sometime he told us about the day when he nearly threw away the camera reels because some tourists tried to capture his picture. He said that he hated photos very much.
I wanted a photo with him really bad at this moment just because he didn’t like taking photos. so I asked him if we could take his picture. Surprisingly, he agreed for a photo.

I wanted to take a photo with him as soon as he said he hates pictures. This was it. There was no light source except for a small candle. So, this photo was only possible with In-built camera flash. If you look closely you’ll figure out that he has one eye dark black compared to the other.

After that he took us down out of the cave and showed us all the locked cave which looked even more dangerous. He started walking to his own path and we left the place thinking about the most thrilling and exciting experience that we had in such a short period of time.

It took me lots of time to write this post because I’ve switched my keyboard layout to DVORAK.

Edit: The Baba who lives there is known as Tiger Baba. He and his friends are very welcoming and will be more than happy to talk with you and answer your questions. You might not find him completely dangerous, since everything I’ve written above was my own experience – mostly psychological.

They are really good people and will be more than happy to meet you, if you visit them. If you haven’t, then you should definitely pay him a visit. I had a good experience and feel very lucky to meet him.

If you enjoyed reading this article, then please consider subscribing for future updates by clicking here. You’ll be sent similar articles or follow up of this article, so you can stay updated.

Similar articles:
– 7 Ways to Protect Yourself from Difficult Situation
– Life and Time – Both are Fleeting
– Happiness Without Event
– Create Your Own Line
– Stop! Life is Not a Race